Walking the beach at high tide is not something I usually do, but today is my 75th birthday, and my Queensland daughter is visiting, so why not? As always, there are gifts, this time mainly the subtle ones of sand patterns marking some more than usual ferocity of the sea. 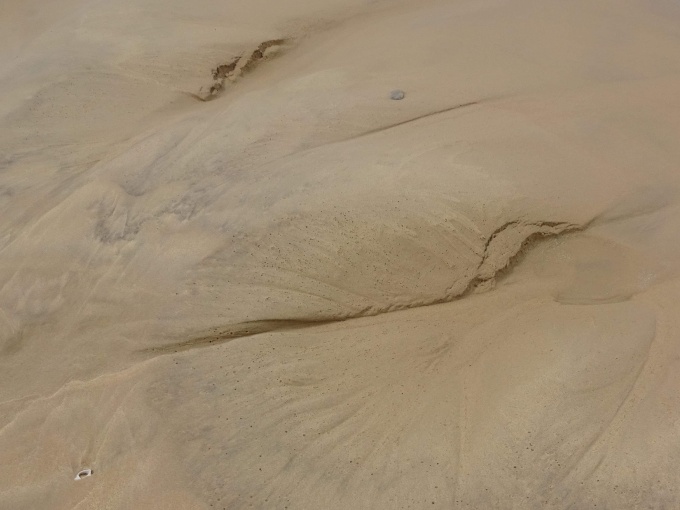 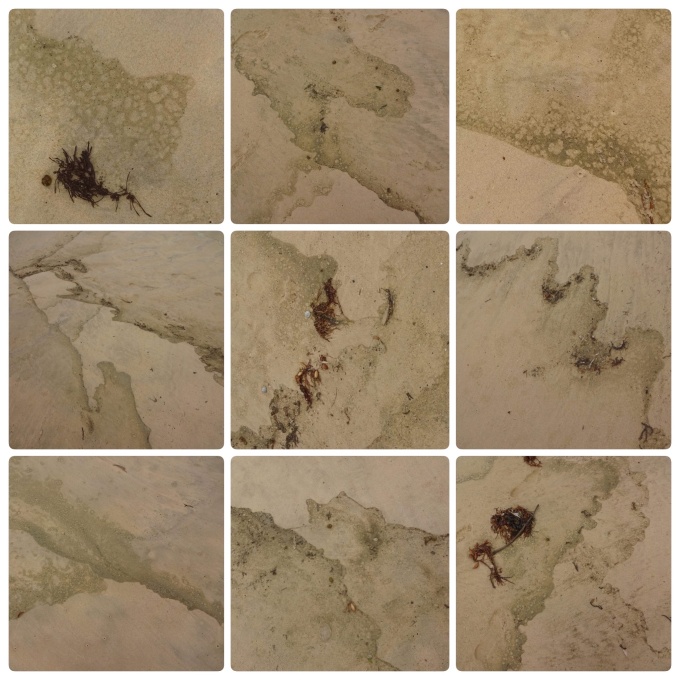 And look what else I found!

I don’t often go into a shop when I’m not shopping, but this time I was accompanying a friend, so I had time to seize photographic opportunities: onions and potatoes nestled in brown paper bags; cabbages and rock melons nuzzling each other; lettuce gleaming brown-maroon and fresh green; a basket of small fruit for the taking; a brush for scrubbing vegetables that looks like an old fashioned shaving brush; and the gills and frills of mushrooms.

III: In search of dianella …

… I find gutters full of dry leaves just waiting to combust. Northern NSW is on fire across an unprecedented area, and as I crunch my way along the track near Joe’s, I think “We’ll be lucky to escape conflagration this year.”

I find the colony of dianella in bud, but my attempt to photograph tiny globules of purple-blue on a wavering stem is a failure. At least crunchy leaves stay put. 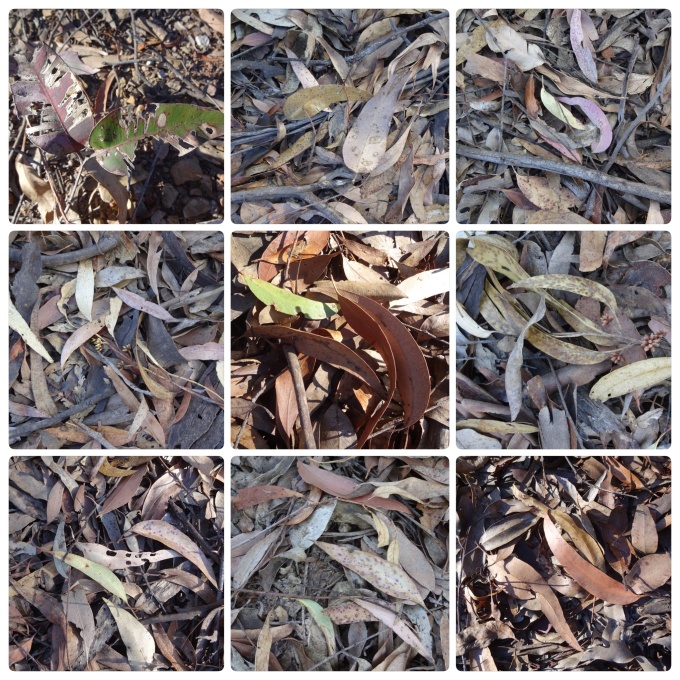 Once I’ve found the dianella patch I can raise my eyes and turn my gaze out to a glimpse of mountains: across a shadowed clearing, a faint line and then further down the road, across burrawangs, a more definite sighting. Heavily wooded so not much comfort in fire season. 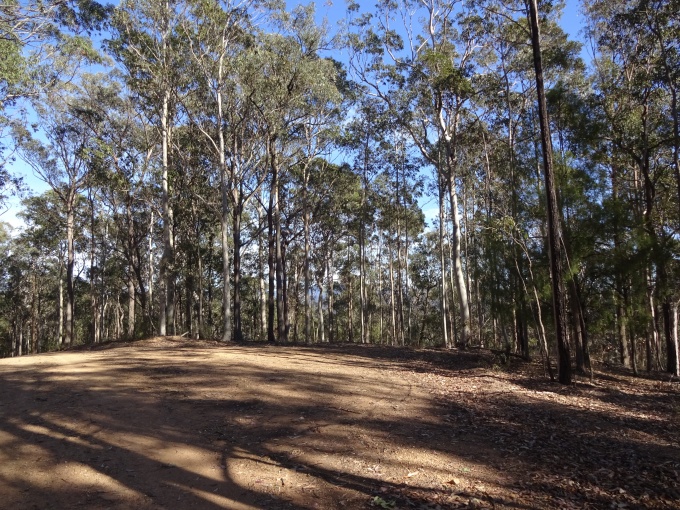 Outside Joe’s, signs of his fire preparation, everything piled on the boat so he can rake up around the house; and tools for a garden that may need to be abandoned for lack of water. 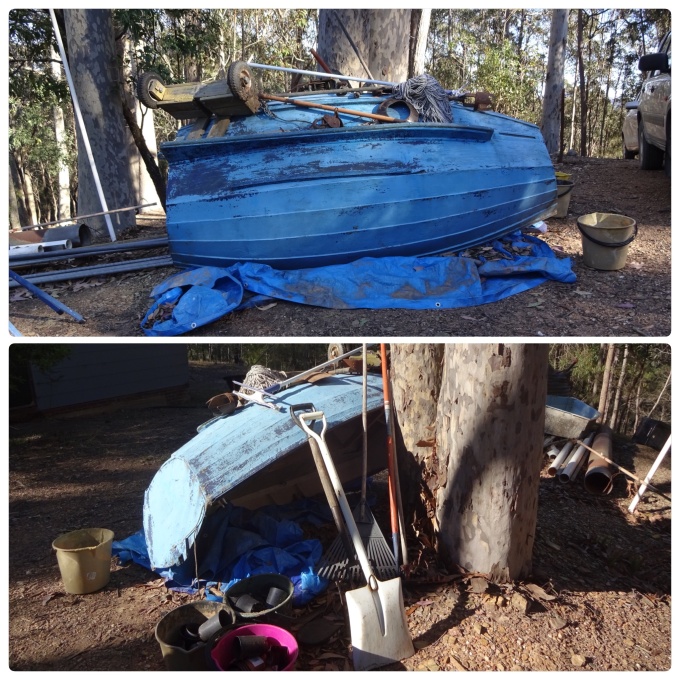 IV: The Dreaming Track* from Kelly Lane towards Coila Lake

For a year now, Joe has been on a mission to collect specimens and identify the twenty+ local eucalypts. He has two files containing nuts, flowers (sometimes), leaves, and leaf rubbings, carefully annotated with date and place of collection. There are still two evasive species. On an almost autumnal spring morning we take to the bush, in search of better specimens from a splendid tereticornis.

Of course that’s not all. As we enter the track we look up the hill over a vista of maroon, green and straw-coloured bladey grass, a herd of kangaroos taking flight as they notice our presence. This is near where a friend’s dog was recently disemboweled by a roo.

This is now national park, but there are occasional signs that it was once farmland.

The wide expanse between dunes and bush, usually boggy if not lagooned, is dry with only occasional squelch and puddle. The reeds, bent low, by reclining macropods maybe, are flowering. 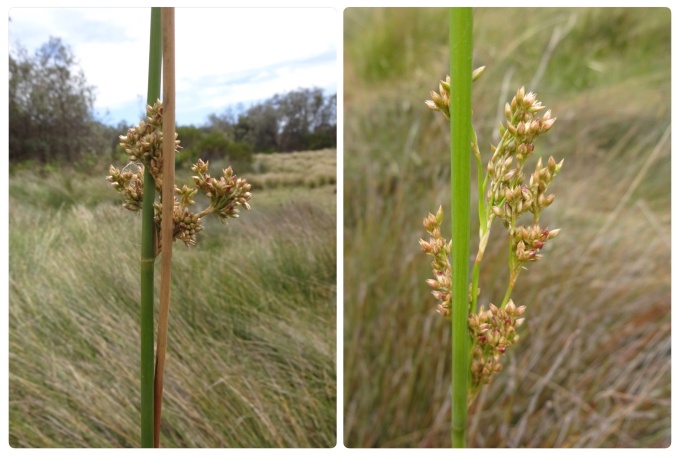 This water is unusual. The soil is more likely to be cracked, but things are still looking pretty healthy. 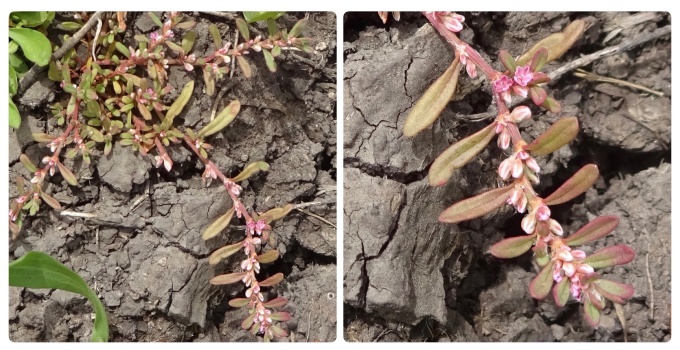 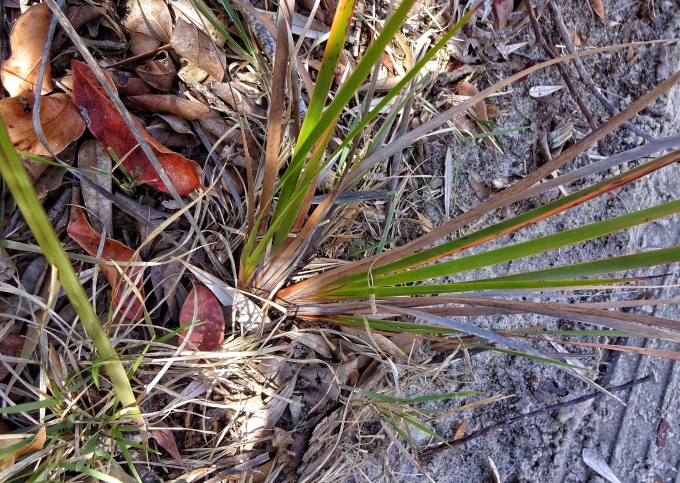 This is supposed to be a walk looking for eucalypts, and while I am eminently distractable, Joe is not. While I crouch and bob and scrutinise the ground he is examining eucalypts, and he is rewarded by a “hallelujah” moment. There, beside the track, branches hanging low, loaded with buds and nuts, low spreading habit clearly visible, is Eucalyptus eugeniodes, white stringy bark, one of the two missing species. 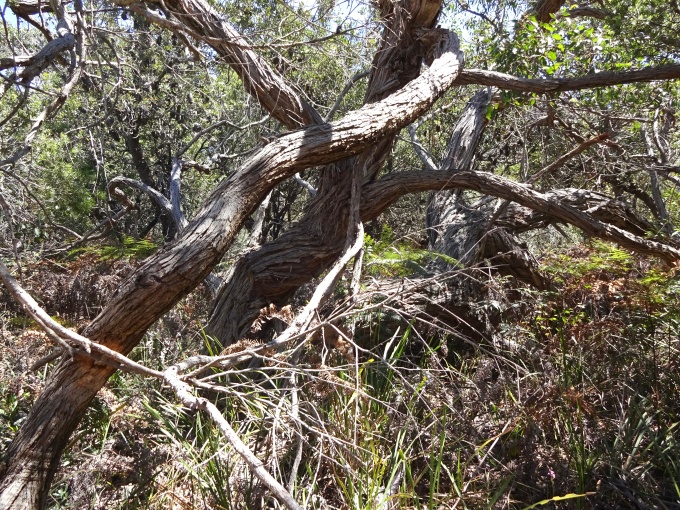 We’ve reached the climax of the walk, a tree, not the lake as intended. Joe has a bag full of specimens and a contented smile. As we drive back to the highway, he spots an echidna snuffling at the edge of the road. I’m too slow to catch it with its snout visible. By the time I extricate myself from the car it’s heading for cover.

While eucalypts are foremost in at least one mind out of two, we walk past ti-tree loaded with nuts, some nuts edged with the raggedy remains of flowers, the odd flower still in full bloom. 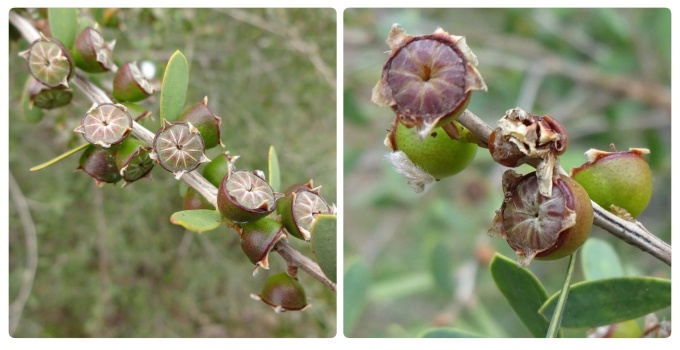 The track is mainly through casuarinas and their needles are thick on the path. Their robust roots make patterns amongst the needles and one needs to keep an eye on one’s feet to avoid tripping over.

Our goal is a large area of forest red gums (Eucalyptus tereticornis) which gave us huge pleasure when we stumbled amongst them a while back. It’s unusual to find such a concentration of a single species, and when we visited them before they were glowing smooth-trunked and twisting sinuously. Today the bark is flaking and warty, the foliage sparse, and many lower branches dead. There was little of the magic of the last visit, although the prospect through the trees was still enticing, and so was the twisting of trunks and branches. 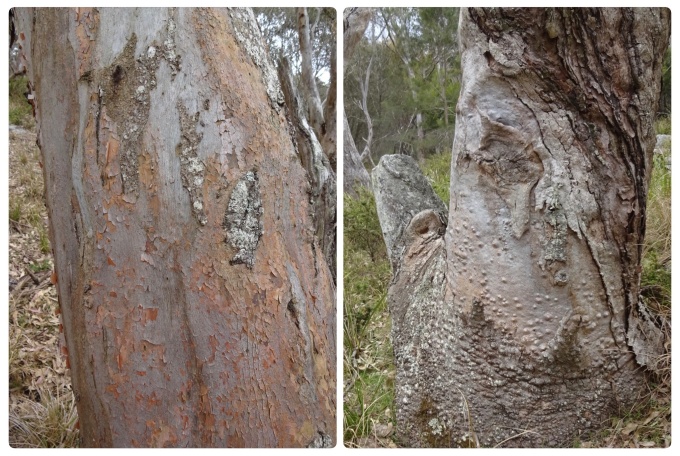 Again I need to watch my feet, this time to avoid a tumble caused by rocks covered in lichen. 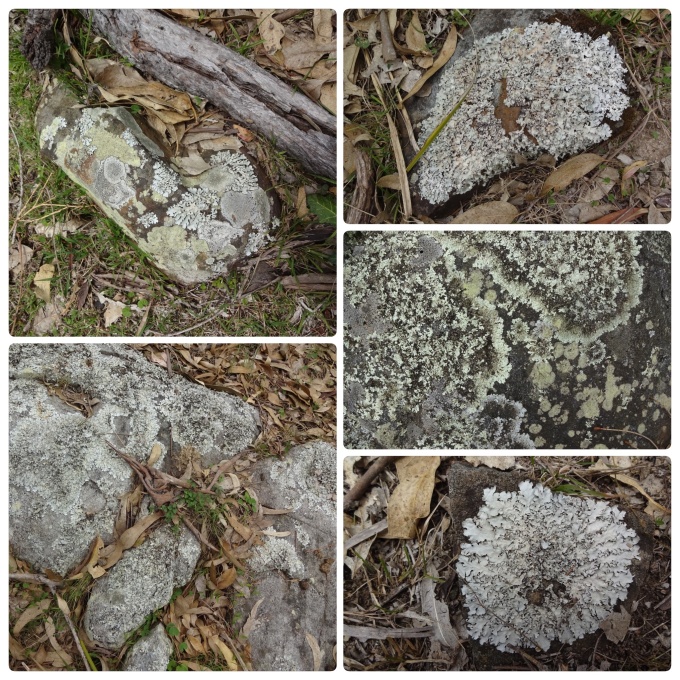 The junction between the track and the dirt road to Honeymoon Beach is marked by a hakea, and a bit further on, another snuffling echidna. This one is burying its nose deep in the dirt and is unphased by passing cars and observing humans, until my keys click and it hurries off into the grass. Seeing an echidna is fairly rare: we’ve sighted two in two days.

We walk on down to Honeymoon Beach, past lomandra, flowering and past flowering, and the brightness of purple top, the savagery of a thorny white vine and new life sprouting from an apparently dead tree. On the beach is a sand labyrinth, the treasure in the centre the purple berries of the boobialla.

The walk back to the car is much faster as the air cools. I pause briefly to photograph the delicate flowers of Lomandra multiflora.

* Dreaming tracks or Song Lines link places visited by Aboriginal people: the Bingi Dreaming track links campsites, ceremonial and trade sites, fresh water and plentiful coastal food sources. We’re following in the footsteps of the Brinja-Yuin people as we walk the track section by section (it’s 13.5 kilometres one way), returning day after day to enter it at a different point, to cover new territory and to revisit a few favourites: trees, and a pathway or two.

VI: Around the block at Spud

Since my return from Warsaw my life has been a mess of time-wasting, non-achievement, and for the last few weeks a dodgy back. Not any more! A shower. Load of washing on. Intentions for the day clearly set out. Beginning with a short early morning walk into the sun. Almost as an afterthought, the camera.

The first thing I spot is a rush in flower. I know it’s a rush because I did a quick differentiation at the weekend of the difference between rush, reed, sedge and grass. Good start to the day – a bit of revision!

Then delicate pink budding that looks like a collection of tiny fists, and a whole gallery of ferns, from fresh green barely unfurled, to discarded, desiccated and black rimmed. 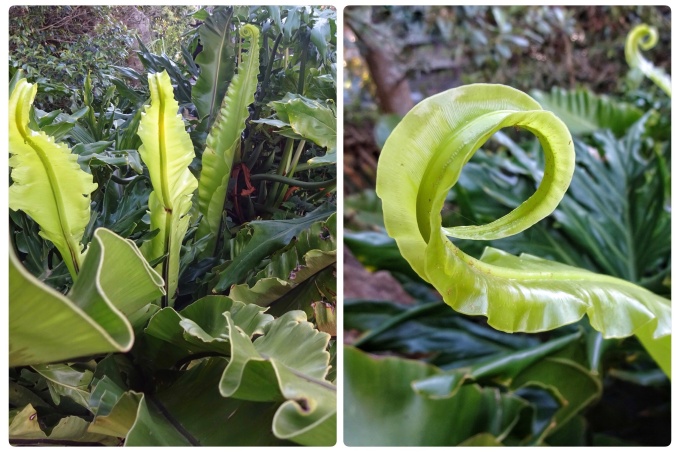 Finally, that peacock of the plant kingdom, the passion fruit.

Not a bad haul for a few hundred metres.